Mass street parties in Barcelona turned violent over the weekend, with dozens of people arrested and injured in clashes. Outdoor drinking parties – known in Spanish as botellones – coincided with the fiestas of La Mercè, the annual festival of the city of Barcelona, ​​which is a long weekend in Catalonia.

The tension began on Friday, the first night of the holidays, when 15,000 people gathered in the space between Plaza de Espanya and Maria Cristina Avenue, according to local authorities. Some 500 police officers were on duty to prevent street parties from spiraling out of control. The plan was to prevent the sale of alcohol on the streets after 11 p.m. (the legal limit for stores) and to impose fines on those who drink alcohol outside. Although this strategy worked in several neighborhoods of the Catalan capital, it did not prevent the mass street party in Plaza de Espanya. As the night wore on, some people were seen throwing bottles on the ground or at passing cars, according to participants who spoke to EL PAÍS.

The most serious incidents took place on Saturday, when more than 40,000 people – most of them in their twenties – gathered along Avenue Maria Crista, all the way to Avenue Rius i Taulet. Cars, motorcycles and trees were set on fire. Hand-to-hand combat and knife fighting left many injured. Objects were thrown at police cars. And the windows of the Fira Congress Center were smashed and destroyed. Two stores were also damaged overnight. Agents of the city’s local police, Guardia Urbana, and Catalan regional police, Mossos d’Esquadra, made 22 arrests, while the Emergency Medical Service (SEM) treated 34 people, including 14 wounded with knives. or glass.

At midnight, the Guardia Urbana set up a perimeter to prevent revelers from cutting off traffic and keeping them in the square. But this did not stop the young people from spreading in the avenue María Cristina and in other neighboring streets. The perimeter was lifted at 3 a.m., when the fighting started to erupt. In one, a young person was in need of medical attention after being hit with a glass bottle. Albert Batlle, the deputy head of security in Barcelona, ​​said there may have been a sexual assault as well, but the case has not yet been confirmed.

“What happened is unacceptable, it has nothing to do with the La Mercè celebrations,” said Barcelona mayor Ada Colau, from the leftist party Barcelona en Comú. “The red lines were crossed and we saw how a problem of uncivil behavior and intense occupation of a public road the first night [Friday] has become a problem of public order, crime and vandalism. Colau also thanked the police for their efforts, saying: “It is very difficult to intervene when there are 40,000 people. “

Night rooms, except those with outdoor spaces, remain closed in Catalonia, due to restrictions aimed at curbing the spread of the coronavirus. A 25-year-old woman at another street party on Saturday said it was to blame for the outdoor drinking. “We’ve been home for two years. When we see botellones on television, we are always shocked, but people keep going out, they don’t open nightclubs to us, ”she said during the party in the square in front of the museum. Contemporary Art of Barcelona (MACBA), where hundreds of people had gathered.

In a press release, the Catalan Federation of Night Places (Fecano) said without lifting the restrictions on nightlife establishments, “the serious problems of public clashes that are occurring, especially in Catalonia, cannot be fought “. 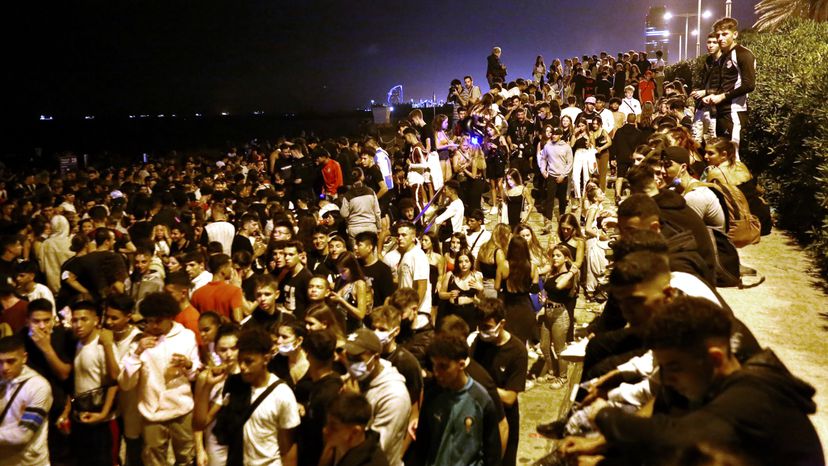 Outdoor party on a Barcelona beach, the third night of the La Mercé parties. Video: images of revelers (Spanish text).

On Sunday, the third night of the La Mercé fiestas, thousands of young people from the neighborhoods of the city and its surroundings gathered for another mass street party. Due to the heavy police presence in Plaza de Espanya, revelers this time gathered on Bogatell Beach, with the party stretching over a mile to three other beaches. The young people, mostly around 18, shared laughing gas and danced to music on speakers of varying sizes. While many police were present on Saturday, with dozens of vans at the scene, this was not the case on Sunday: no uniformed police were seen and there was less fighting.

Mossos leader Pere Ferrer said on Sunday that while “the criminals” who committed acts of vandalism or theft were “opportunists”, they were a “minority”. He added that the objective of the police deployment was not only to prevent street parties, but also to prevent crime. Responding to criticism of the police shortage, Ferrer said Saturday’s operation included plainclothes police and was supported by drones, which offered the force “good qualitative information.”

The massive consumption of alcohol in the streets has been attributed to a perfect storm of factors: pandemic fatigue among young people, the fact that nightlife establishments remain closed in Catalonia (with the exception of the dozen outdoor spaces), the long weekend and the fact that for many young people it is the first time that they can celebrate La Mercè. The result has been alcohol fueled violence and a little respect for coronavirus safety measures such as face masks and social distancing.