Display Week 2022, which returned as an in-person event after a three-year hiatus, is an international display product conference organized by the Society for Information Display. It takes place from May 10 to 12.

At its booth, Samsung Display showed prototypes of its Flex G and Flex S foldable displays. The Flex G folds twice, rather than the single folds of current models, while the Flex S folds both inward and outward, explained Samsung Display.

The company also introduced a 6.7-inch sliding display product that extends upwards, not sideways like the existing sliding display, as well as a foldable organic light-emitting diode (OLED) display for gaming. .

LG Display first introduced a two-way foldable OLED display that folds both inward and outward, and a 97-inch OLED panel, which is currently the largest OLED display in the world , during the Display Week event.

LG Display’s foldable 17-inch OLED panel for laptops, also on display, is also the largest of its kind, according to the company. 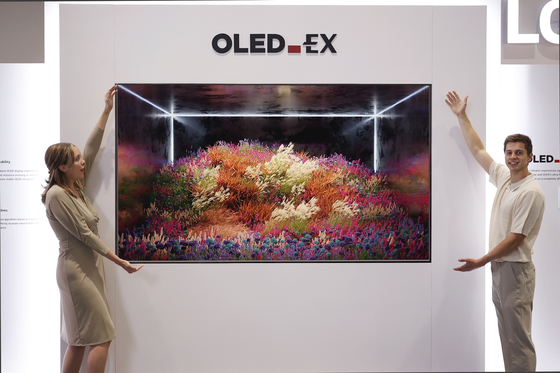 Samsung Electronics and LG Electronics also participated in the Integrated Systems Europe (ISE) 2022 in Barcelona, ​​Europe’s largest trade exhibition, which kicked off at the Fira de Barcelona, ​​​​Gran Via, on Tuesday. The event will take place over four days until Friday with more than 800 exhibitors.

Samsung showed off a new light-emitting diode (LED) display at the event on Tuesday, while LG Electronics showcased its commercial digital display offerings that include transparent OLED displays and microscopic LED signage.

In its 1,728 square meter (18,600 square foot) exhibition space, Samsung Electronics showcased its The Wall LED display, with a pixel pitch of 0.63 millimeters, 43% smaller than the previous model, which results in higher resolution.

Samsung began the first sales of its The Wall display in Europe with the launch of the ISE 2022 and plans to officially start shipping the product in the global market in the third quarter of this year.

Both Samsung and LG are offering a virtual version of their booths online.