The Mobile World Congress was held virtually in Barcelona

This year has seen an increase in the use of technology as a way to make things virtual rather than in person. This includes attending concerts or meetings via a zoom call, or enjoying some of your favorite pastimes electronically, including casinos.

The Mobile World Congress, also known as MWC Barcelona, ​​is one of the many important events held virtually this year, and we are happy to report that the event was a success online.

What is MWC? Who is the GSMA?

The GSMA represents the interests of mobile operators around the world, bringing together nearly 400 companies from the broader mobile ecosystem, such as phone and device manufacturers, software vendors, equipment vendors, corporations Internet and related industry organizations.

Usually the event takes place in Barcelona, ​​Catalonia, Spain, at the Fira de Barcelona Gran Via in February or early March. The main participants were device manufacturers, network equipment suppliers, representatives of wireless operators and the press. The number of visitors each year typically peaks at around 100,000, while mobile manufacturers often use the conference to reveal future devices.

The GSMA has already expanded to Shanghai, China and Los Angeles, United States, with plans for the GSMA to expand the MWC brand to two more exhibitions. However, the brand is still synonymous with the Barcelona event.

The GSMA prepared for the return of MWC Barcelona at the start of the year. Building on the achievements of the GSMA’s first major hybrid event in Shanghai this year, MWC21 heralded a new era of mobile ecosystem connectivity and cooperation.

The designers dramatically improved the hybrid GSMA experience at Fira Gran Via, which ran from June 28 to July 1, 2021, which combined unique personal and virtual elements, attracting 35,000 people from around the world and thousands others online.

GSMA Ltd CEO John Hoffman was very proud to announce the virtual event this year. He explained how, for the first time, the brand’s new hybrid features would enable attendees and their organizations to create tailor-made experiences for MWC Barcelona, ​​with this year’s theme “Connected Impact”.

The theme was based on the current global situation and focused on the health and safety of participants and those who could not attend in person in Barcelona. The event emphasized the involvement of everyone, despite the inability to attend.

Hoffman went on to stress how important it is to adapt to the current global situation and explained how they learned from the hybrid event earlier in the year in Shanghai. The Shanghai event had a huge impact on how the event organizers organized the MWC21 Barcelona event. 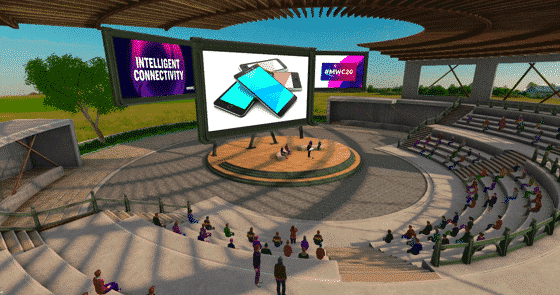 The influence of the teams

A third of the 350 speakers at MWC21 saw the announcement of the official video conferencing and meeting partner GSMA of Microsoft Teams. Integrated with existing MyMWC digital platforms, Teams provided a host of features that created a fantastic experience for both in-person and virtual participants.

Online attendees could participate in virtual tours of live exhibits hosted by industry experts, ask questions via live chat, and watch on-demand sessions. Themes such as 5G and the Internet of Things have been covered by a series of “Topic Tours” supported by Dell Technologies, Orange, Royole, ZTE and Kaspersky. Also showcasing their latest products and innovations, exhibitors like Orange and TelcoDR offered exclusive company tours.

This year’s partnership program also included a series of virtual and hybrid events. The sessions were moderated by thinkers from around the world, including AWS, Braze, Facebook Connectivity, Huawei, IBM, KORE, Lenovo, Nvidia and Snapchat, who provided insights that could solve some of the most complex challenges we face. today.

Concentrated networking workshops brought together leaders from various industries such as automotive, fintech, manufacturing, mobile IoT, telecommunications and drones. Each meeting was hosted by an expert and aimed to promote debate on critical issues and allow participants to connect.

The MyMWC app used over 300 data points, enhancing iLeader, Leader and VIP users with tailored meeting and contact recommendations. The integrated videoconferencing function gave participants the possibility to network wherever they were.

The MWC21 is proof that a new era has started which will involve more virtual interactions. The evolution of the way we organize events is due to the technology developed in recent years. From building their app to hosting virtual conference calls with speakers around the world, the MWC team made it work.

From your armchair, you can play all your favorite games and communicate with people around the world. One of the most important events in mobile communications recently took place in digital form, paving the way for all other key events to follow suit.